In a Wall Street Journal article from March 27, 2017, by Laura Kusisto, as well as in a few blog entries on WSJ, the point is made that homeownership in the US is at a historic low. At 63.7% homeownership, it is the lowest such number for the past 48 years!
The reasons given for it include more strict lending practices following the recession. Perhaps another issue is that the recession is still fresh enough to have taken the belief away that your home will “always appreciate “ in value and will serve not only as a residence but as a major lifelong investment. Some people may no longer think so.
Add to that the natural desire of people to be free to move at will, and we have only 63.7% of homeowners in the US as of the 4th quarter of 2016.
As investors, of course, we are quite familiar with the powerful financial effect owning houses can have on our future, especially if we finance them with the incomprehensible 30-year fixed loans still available, and at still super low rates.
Having 63.7% homeownership percentage means, of course, that a full 36.3% of the population are renters! That is about 117,000,000 people!
Those of us who know the value and power of investing in houses and holding them as rentals can only look at this statistic as a positive – obviously, these renters need a place to rent and we will have a larger renter pool available for our homes. Sure some single people may want to rent an apartment, but families usually prefer renting a single-family home.
Coupling this data regarding the highest number of renters available to us in nearly 50 years, with the still-low interest rates available on 30-year fixed rate loans, means this is an excellent time to stock up on single-family homes as investments.
Interest rates are on the way up. The fed keeps reminding us they will continue to raise rates. Having a period of such low rates (despite the small “Trump Bump” we experienced recently), makes it a special time to buy and hold.
If you are under the FNMA allotted 10 loans per person (20 per married couple if they buy separately), it is high time for you to go out there and purchase brand-new single-family homes in good areas, finance them using these great 30-year fixed rate loans, which will never ever keep up with inflation (thus they will get eroded by inflation as to their real dollar value). The homes will be managed by local property managers we use ourselves in the various cities in which we invest.
We will discuss this as well as many other important topics for investors, at our quarterly ICG 1-Day Expo near the San Francisco Airport on Saturday, May 20th. We will have experts lecturing on important topics, lenders, market teams from the best markets in the U.S., and lots of Q&A, networking, and learning. Just send us an email at info@icgre.com. Just put in in the subject line, “Saw your blog on homeownership” and list your name and those of your guests. We will confirm!  See you on May 20th. 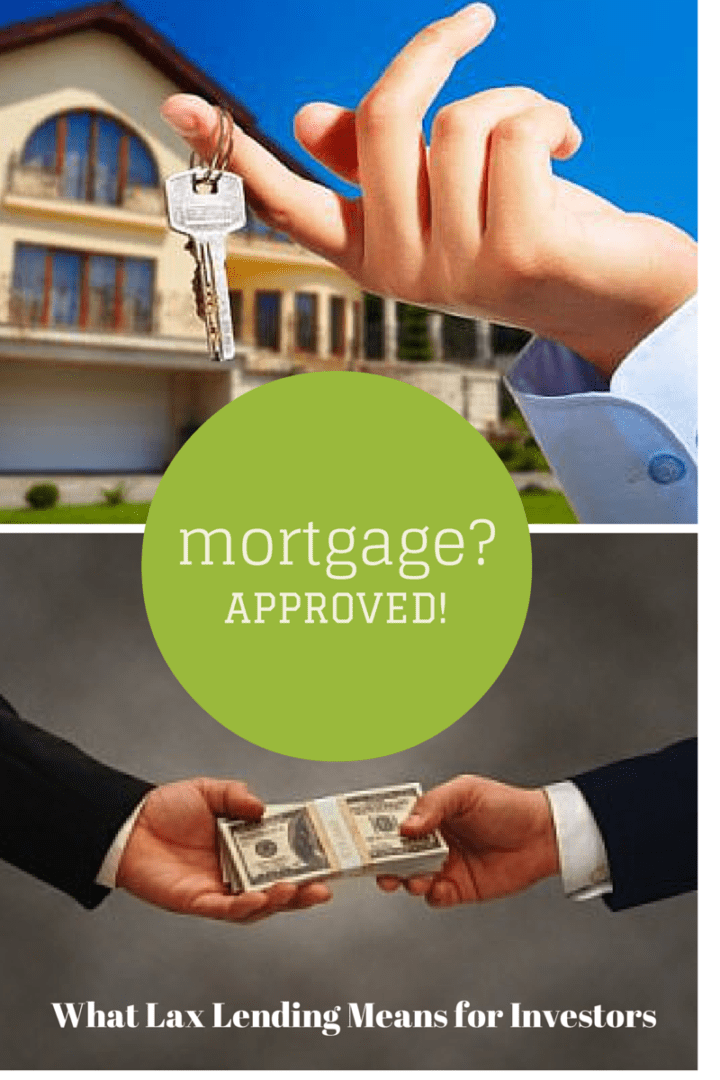 The WSJ reports  (in an article on Saturday 10/18 by Joe Light), that Fannie Mae, Freddie Mac, and mortgage lenders are in discussions to ease lending standards; including loans with 3% down to homeowners and allowing people with weak credit access to home loans.

Apparently, an agreement is in sight to enact these measures.
Even if none of this trickles down to investors (which I doubt), this is great news. As more people qualify for loans, greater demand for homes is likely to help push values up in many markets. It will also be easier to sell investment homes due to the larger pool of potential homeowner buyers.
I suspect that, as usual, the more lax lending standards will reach investors in one form or another; making investors able to increase their portfolio at the current incredibly low rates (from a historical perspective). We are already seeing a local lender in Oklahoma City lending to foreigners at good investor rates (albeit at 50% down), as well as to investor purchases for investors owning between 10-15 financed properties (also with 50% down. In fact the loan is identical to the foreign investors’ loan). This lender has already agreed to lend in Atlanta and may soon expand to other states as well.
This is positive news for investors, no matter how you slice it.
Here is the article as it appeared yesterday:
Surging Home Prices Are a Double-Edged Sword

By  Nick Timiraos
March 9, 2014, 4:35 p.m. ET
The U.S. housing market faces a challenge at the start of the spring sales season: higher prices.
It is hard to overstate the benefits of rising prices to the economy broadly and to homeowners, banks and home builders specifically after years of declines. Price gains have pulled more Americans from the brink of foreclosure and given home buyers more confidence that they won’t get stuck with an asset whose value will decline.
But those gains have a painful edge, too, especially because prices have bounced back so strongly. The increases have rekindled concerns about affordability, particularly for first-time buyers, and could damp the gains of a housing rebound still in its early stages. The U.S. housing market faces an unexpected challenge at the start of the spring sales season: home prices are on a tear. Price gains have pulled more Americans from the brink of foreclosure and boosted demand from consumers no longer afraid to buy.
“Prices ran up so fast in 2013, it hurt first-timers’ ability to become homeowners,” said John Burns, chief executive of a home-building consulting firm in Irvine, Calif. “It’s going to be a slower recovery than people had hoped because a number of people have been priced out of the market.” Home values nationwide are up 11% over the past two years, according to real-estate information service Zillow Inc. and 14% below their 2007 peak. Mortgage rates, which jumped a full percentage point to about 4.5% in the past year, have sharpened worries over housing affordability.
Even as prices have increased, housing still appears affordable by one traditional gauge. Since 1990, American homeowners have spent about 24% of monthly income on their mortgage payments, according to data from Morgan Stanley. Today, that payment-to-income ratio stands at around 20%, below the long-run average. The problem with that view of affordability: It assumes borrowers have great credit and large down payments. The ratio isn’t favorable for first-time buyers and others with lower incomes and smaller down payments, which increases their monthly financing costs. The payment ratio for first-time buyers was around 24% at the end of last year, in line with its long-run average, according to the Morgan Stanley analysis.
This pinch on first-timers is troubling because, so far, the housing recovery has depended to an unusual degree on cash buyers and investors. The relatively weak position of entry-level buyers could further suppress the homeownership rate—now off more than four percentage points from its 2004 peak—as more of them rent, said Vishwanath Tirupattur, a managing director at Morgan Stanley. Making matters worse, home prices are going up fastest in markets that are already expensive, such as San Francisco and Los Angeles. Just 32% of California households at the end of last year could afford the monthly payments on a median-priced home in the state of $431,510, assuming a 20% down payment, according to the California Association of Realtors. That was down from 56% of households that could afford the payments on a $276,040 median-priced home in early 2012.
Rising prices are only part of the problem for first-time buyers. Inventory shortages and tougher mortgage-qualification standards benefit buyers who can make large down payments and those who can forgo a mortgage altogether. Because many markets have low supplies of homes for sale, all-cash buyers have routinely beat out first-time buyers by guaranteeing a quick, worry-free closing for sellers.
Meanwhile, federal officials have repeatedly increased insurance premiums on loans backed by the Federal Housing Administration, which serves many first-time buyers because it requires down payments of just 3.5%. While mortgage rates at the end of 2013 reached their highest levels in more than two years, the all-in cost of an FHA-backed loan—due to insurance-premium increases—was closer to a five-year high.
Rising prices are less of a problem for current homeowners seeking to trade up because they can tap growing home equity to make their next home purchase. An index tracking housing affordability from data firm CoreLogic Inc. shows that homes were 17% less affordable for first-time buyers at the end of last year compared with the year before, while the index was down just 6% for existing homeowners.
Ideally, higher prices would stimulate more home construction, which would ease inventory crunches that are partly responsible for price increases while boosting job growth. But builders have been slow to ramp up production, skittish after being caught with too much inventory when the 2008 downturn hit. Last year, many focused instead on higher-end houses, while entry-level construction was subdued. Sales of new homes last year rose by 14% from 2012, but the number of homes sold for less than $150,000 fell by 28%. Sales above $500,000 grew by 36%.
The worry is “a situation develops where construction remains low and prices continue to outpace incomes before first-time buyers can get in, and the next thing you know, you have to” bypass standard mortgage-qualification rules “to get people into homes,” said Thomas Lawler, an independent housing economist in Leesburg, Va.
Others fret that low interest rates have allowed prices to rise too fast relative to incomes, which have stagnated. While homes are still affordable on a monthly payment basis because of cheap financing, homes no longer look like a bargain when comparing prices to incomes. For the past few years, policy makers have focused on breaking a vicious downdraft in home prices. Now, it wouldn’t hurt housing to see price gains flatten out, especially if income growth remains tepid. If not, the housing market’s roller-coaster ride will continue.
Write to Nick Timiraos at nick.timiraos@wsj.com.