Title: Capital Protection of Your Investment When the Market Takes a Downturn

Written by: Lorraine
Subtitle: Should Investors Be Anxious When the Market Is Down? Maybe Not   As with most things in the world, markets tend to be cyclical, and capital protection becomes a big concern. If there are boom times, there are bust times as well, and one typically follows the other. Investors often ask me what should […]
Published on December 6, 2022
Last update: 2 months ago
Est. Reading: 3 minutes

Subtitle: Should Investors Be Anxious When the Market Is Down? Maybe Not

As with most things in the world, markets tend to be cyclical, and capital protection becomes a big concern. If there are boom times, there are bust times as well, and one typically follows the other. Investors often ask me what should they do in the event of a downturn in the market – what should I do for capital protection in the event of a market downturn? What should I do to protect my investment? My answer is – nothing. If there’s an economic downturn, you do precisely nothing, as I explain in my latest video. In fact, there is a silver lining to that recession cloud when you're a real estate investor.

Why I tell investors to do nothing.

It can happen that the values of properties start to plummet, sometimes falling below the value of the loan itself. This can be pretty nightmarish for investors. A lot of people want to do something, anything during a market downturn such as this. Many rush to try and foreclose, asking or permitting the bank to repossess their property. Basically, they want no part of the anxiety and uncertainty. To be sure, this is tempting – there is that instinct to cut one's losses at such a time.

However, it is important to do nothing for the sake of capital protection. Don’t sell, don’t foreclose, and do not ask for the bank to intervene. Take it from me, someone who has had literally decades of real estate investing experience. This is the wisdom of hindsight that I now possess; because of which I urge investors to do nothing when markets are down and property prices are falling. It took me a long time to understand why doing nothing is the best thing to do – even though it is the most difficult thing to do in the world.

In my latest podcast, I share the story of one investor who did nothing during the recession of the noughties. I juxtapose this with the story of an investor who sold up and how the one who did nothing ended up rich at the end of it all. We invested a lot in the Phoenix metropolitan area at the time. People that had bought new homes for about $150,000 in 2001 faced the prospect of below-buying-price valuations by 2009. The guy who did nothing continued to earn rent and by the time the recession was over, he was in a much better financial position, as I explain here. 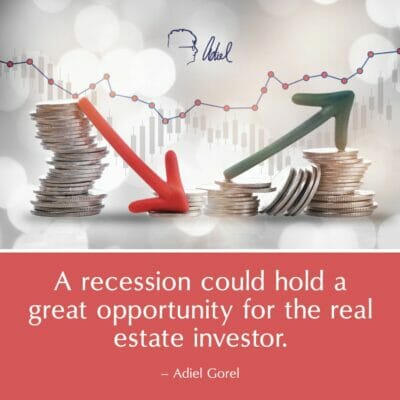 Even a recession has a silver lining.

While most people would like to be the owner of the home that they live in, this desire tends to take a backseat during a recession. People are more concerned about capital protection. When the economy is in the doldrums, jobs are uncertain, money is tight, and people don’t want to take the chance of tying up their savings in a big new purchase. They would rather rent and continue to live in hired accommodation. For this reason, there tends to be an uptick in the demand for rental accommodation when the market is on a downturn. Property owners are most likely to get steady, stable, good rents when the markets are down. This is yet another reason to do nothing during a recession.

Again, I will admit that doing nothing is tough – it is the most difficult thing in the world, but that is what investors have to do in the event of a market downturn to protect their capital. Investing in real estate is a long-term commitment and sometimes it is just a case of waiting out the storm. To know more, sign up for our upcoming property event for free– you have nothing to lose and much to gain.