Why Americans Are Heading Back to the Suburbs

This movement plays right into our investment emphasis and is encouraging to see. We will discuss this trend and many more pertinent issues during our 1-Day Expo Saturday, June 14th near the San Francisco Airport (click here to register.) We will have expert lectures on asset preservation, general financial planning and non-recourse IRA loans for houses. Our ICG Real Estate Investors team from the top real estate markets in the nation will be present all day providing learning tools and networking opportunities.

Below is the entire Wall Street Journal article:

Signs of a Suburban Comeback
More Americans Returning to the Land of Lawns and Malls, Census Data Show
By Neil Shah
May 22, 2014 12:00 a.m. ET
America’s big cities have grown faster than their suburbs in recent years, due in part to a slow economy that froze people in place and stunted the suburban swell. Though, a new Census report suggests this trend is starting to reverse. WSJ’s Neil Shah joins MoneyBeat with the statistics and what they mean.
The long tug of war between big cities and suburbs is tilting ever so slightly back to the land of lawns and malls. After two years of solid urban growth, more Americans are moving again to suburbs and beyond.
Fourteen of the nation’s 20 biggest cities saw their growth slow or their populations fall outright in 2012-2013 compared with 2011-2012, led by cities such as Detroit and Philadelphia, according to data released Thursday by the U.S. Census Bureau. 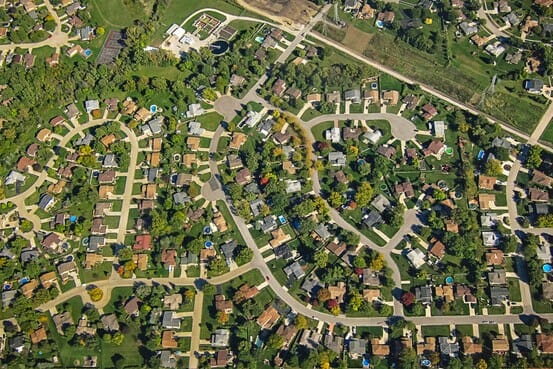 A housing subdivision outside of Chicago. Suburbs are seeing a recent increase in growth. Flickr Editorial/Getty Images
In some cases, fast-growing cities are slowing down: Austin’s growth rate decreased from 3.1% to 2.4%. In other instances, slower-growing cities grew at an even more diminished pace: New York’s rate decreased to 0.7% from 0.9%. A year earlier, 17 of the nation’s 20 largest cities showed faster population growth than the previous year. Suburbs and areas beyond suburbs within the same metro known as exurbs, meanwhile, are seeing an uptick in growth after expanding more slowly during the recession and its aftermath.
All told, just 18 of America’s 51 metropolitan areas with more than 1 million people had cities growing faster than their suburbs last year, down from 25 in 2012, according to an analysis of census data by William H. Frey, a demographer at the Brookings Institution.“City growth may be bottoming out, as well as the downsizing of the outer suburbs,” Mr. Frey said. He said it remains unclear “whether the city slowdown signals a return to renewed suburban growth.” 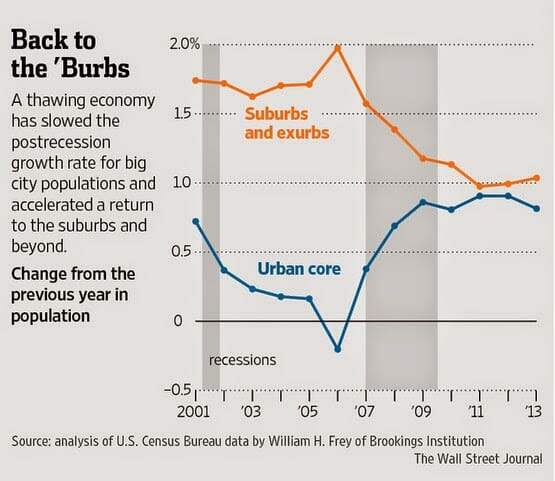 Natalie Dorr and her husband Jon are among those who made the shift to the suburbs last year. The couple wanted to sell their condominium in Chicago and move out of the city much earlier, but the sluggish economy delayed their plans. Ms. Dorr, 29 years old, was pregnant with their second child and the couple wanted more space. Yet they waited, hoping the selling price of their condo would increase.
In April last year, the couple rented out the condo and moved to Deerfield, a Chicago suburb. Having sold the condo a week ago, they plan to buy a home later this year. They got $14,000 more for the condo than they would have if they had sold earlier, Ms. Dorr said. “It made sense to wait,” she added.
Overall, cities are still growing slightly faster than the suburbs—a historical anomaly after decades of American migration to the burbs. Some of the growth has been fueled by younger Americans and retirees preferring city life, either for lifestyle reasons or to downsize their living arrangements.
Anything resembling the post-World War II trend of Americans streaming to the suburbs appears unlikely given the difficulties many debt-strapped young Americans face in buying a home. Still, the Census numbers show a cooling off in the growth rate of urban dwellers.
Cities in metro areas greater than 1 million people grew at a 1.02% annual rate in 2012-2013, down from 1.13% in 2011-12, according to Mr. Frey’s analysis. Suburban areas, by contrast, grew at a rate of 0.96%, roughly on par with the 0.95% the prior year, Mr. Frey’s analysis shows.
At the same time, exurbs are seeing an increase in growth. When taken together, suburbs and exurbs grew at a 1.04% annual rate in 2012-13, up from 0.99% in 2011-2012, according to a separate analysis by Mr. Frey. Urban core areas saw growth fall to 0.81% from 0.91%.
The slowing growth in these urban cores and the increasing gains in the suburbs may be the first indication of a return to more traditional patterns of city-suburban growth,” said Ken Johnson, a demographer at the University of New Hampshire.
Write to Neil Shah at neil.shah@wsj.com
Share this post on:
Twitter Facebook Email Linkedin WhatsApp