Here is the article as it appeared yesterday:
Surging Home Prices Are a Double-Edged Sword

Prices have risen largely because of shortages of homes for sale. While there is growing evidence that inventories hit bottom last year and that some markets are moving back in favor of buyers, the number of homes for sale remains relatively tight still. Foreclosure-related listings have plunged, and traditional buyers haven’t flocked to list homes—at least not yet. New construction, meanwhile, won’t be back to normal historical levels for years. The consensus view is that price growth continues at a somewhat slower pace, but that consensus view could be wrong—for the third year in a row—if there aren’t more homes for sale. 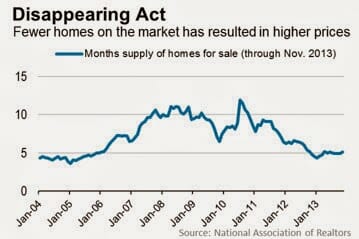 2.  WHERE IS THE HOME-CONSTRUCTION RECOVERY?

While home prices have recovered strongly, new construction activity hasn’t. Part of this may have to do with the fact that home prices are still too low to justify construction, particularly given land, labor, and materials costs. For smaller builders, credit may also be harder to come by. Some economists say new-home demand could remain muted because many move-up buyers don’t have enough equity to “trade up” to that new home. Key issues to watch here: What happens to household formation, and do builders begin to throttle back price gains in favor of selling more homes in 2014? 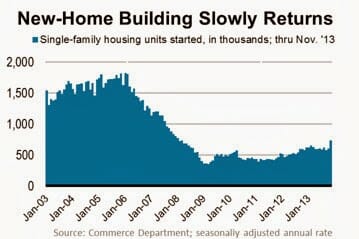 3.  WHAT HAPPENS TO MORTGAGE CREDIT?

Lenders could begin to ease certain “overlays”—or additional credit and documentation checks—that have been imposed over the past few years. Mortgage insurance companies are getting more comfortable insuring loans with down payments of just 5%. So don’t be surprised if, at the margins, it gets a little easier to get a mortgage—especially if you have lots of money in the bank.

Even if it gets easier to get a loan—by no means a given—borrowing costs and fees could rise. Banks also face new mortgage regulations that could keep most of them cautious. Borrowers with more volatile or harder-to-document incomes, including the self-employed or those who make a lot of money on commissions, bonuses, or tips, could continue to face tough sledding. 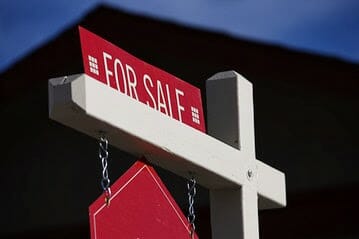 4. WHAT WILL INVESTORS DO WITH THEIR HOMES?

5.  WHEN DOES HOUSING HIT A TIPPING POINT ON AFFORDABILITY?

Rising home prices are a double-edged sword, especially in pricier coastal markets such as San Francisco and Los Angeles. On the one hand, rising prices are giving many homeowners equity in their homes again—an extremely positive development to the extent it means these borrowers are less at risk of foreclosure.

But price inflation is making housing less affordable. This will be a bigger problem if cash buyers retreat from the market in 2014 and/or if interest rates rise in a meaningful way. Consider: In Los Angeles, prices have jumped by nearly 30% in the past two years, to a median of $448,900 in the third quarter. Assuming a 20% down payment, the monthly payment of principal and interest on the median-priced home has jumped from $1,255 in the third quarter of 2011 to $1,823 in 2013—a 45% increase.